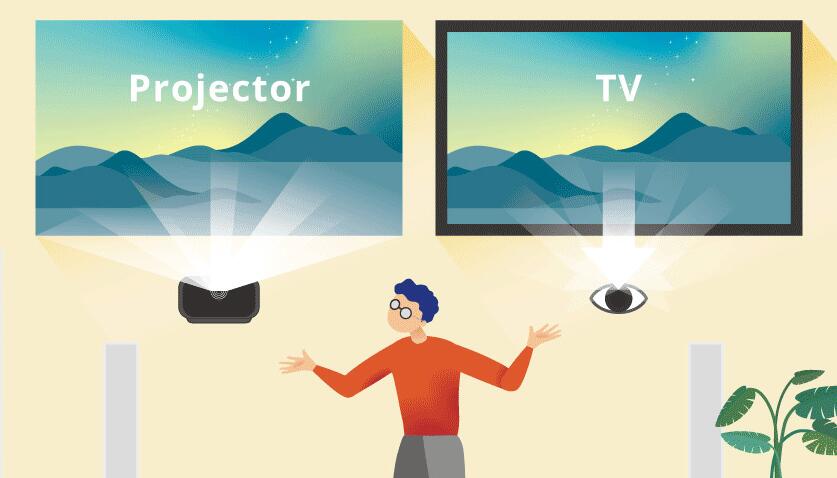 Projector or TV, TV or projector? Most of us probably have a TV set up in our living room, but when it comes time to upgrade, getting another TV isn’t the only option. Even as affordable, big-screen TVs proliferate, there’s still a viable and competitive alternative with today’s best projectors.

While the end result of a TV and a projector is the same, the setups, technologies, and advantages of each are quite different. So, before you invest in your next home theater system, let’s get more familiar with where TVs and projectors differ. 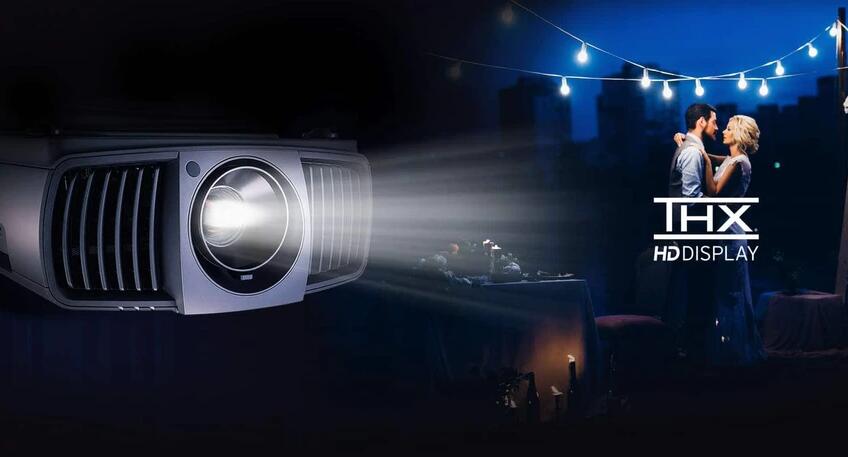 Compared to TVs, projectors are much more affordable. A standard HD projector, including the screen, could cost you approximately $1,000, when a large 80-inch TV could cost $1,500 and upward. When you compare screen sizes, dollar-to-dollar, the projector is a much better option.

For homeowners who prefer to watch movies and shows in all their 4K glory, you’ll miss those tiny details on even a large screen TV. When you compress that many pixels onto a regular TV, it can make them barely noticeable.

With an HD projector, however, you can see every inch of detail that 4K offers. Even as TVs grow larger each year, a projector and HD screen combination is the better option and is sure to do it justice.

Again, TVs are growing larger and larger. But it’s still quite hard to beat that big of a screen. Even as some TVs reach 100 inches, it comes down to a practical question of how to get it into the home and mount it securely to the wall. Screens can be gently rolled, making them easier to transport. And the projectors are not bigger than a game console. This also brings back the first advantage of affordability. The larger the TV, the more costly your entertainment system becomes. 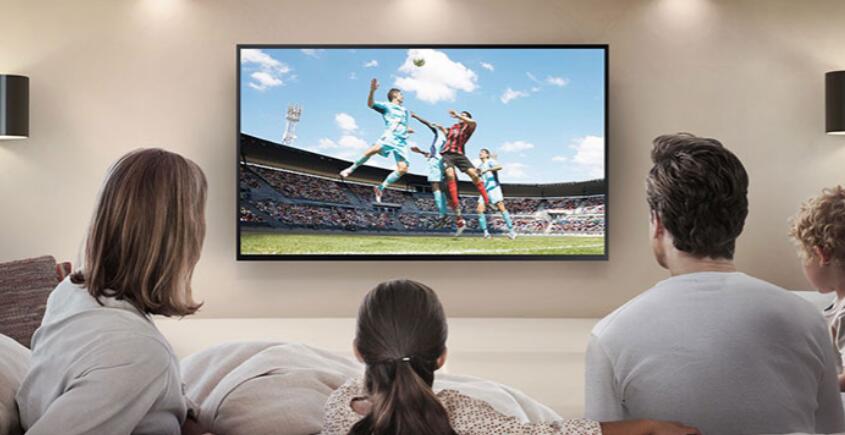 Modern televisions are mostly maintenance-free, due to their long-life LEDs. There’s a greater chance that your entire TV will need to be replaced before the LEDs begin to fail.

Projectors, however, use lamps that burn out from time to time. This may not be a big deal for some, but it’s worth noting. Also, projectors can accumulate dust and need to be cleaned to prevent particles from getting inside.

Projectors require darker conditions to create a clear picture. TVs, on the other hand, are typically backlit with modern LEDs and therefore put out plenty of light at all times. For this reason, a projector is not the best option for a sunlit living room. Projectors require a darker room, such as a basement or dedicated home cinema.

Brightness and contrast go hand in hand. And while projectors are able to create high contrast ratios, it’s pretty much useless if the room is not dark enough. Unfortunately, this causes the projector’s image to appear washed out and with a faded contrast.

TVs, however, are already bright enough. They even work in rooms with maximum sunlight. OLED TV models, especially, offer strong contrast ratios because of the screen technology. So, in essence, if you’re a cinema buff who can’t stand a washed-out image, a TV is the best option. If you’re a cinema buff who has a dedicated theater in a windowless room of the home, a screen is still okay!

When it comes to placement, TVs actually take up less space. Yes, a screen is very flat, even able to roll up, and a projector can be hung from the ceiling, but it’s more than that. What’s involved is the distance needed between the screen and the viewing area.

When you place a projector screen in a small room, you’ll feel like you’re a part of the movie. And not in a good way. You’ll be nose to nose with actors and not able to enjoy all those 4K details. And this is why TVs are the ideal option for certain rooms.

Most modern TVs and projectors already come with built-in speakers but, in comparison, projectors tend to have lesser sound quality. However, if you intend to create a top-notch cinema experience, you’ll want to expand your home theater with a full surround sound system regardless. In this case, the choice between a TV and projector is a toss-up and entirely yours to make.

Projector vs TV: Which is Best For You?

To help you make an informed decision, we’ve broken down the major differences between TVs and projectors, including a general feature comparison, and non-technical factors you should consider, like the size of your room. We’ve also given our TV and projector pick once you’ve made up your mind.

1. Screen Sizes Vary, But Consider The Size Of Your Room

According to the consulting firm Trendforce, the most popular screen size for TVs in North America is 65 inches. Most projectors have a maximum screen size of between 100 and 200 inches depending on the model. The answer here may seem clear, but it’s a lot more complicated.

A projector’s screen size is dependent on its “throw distance,” which means how far away it is from the surface it’s projecting its image onto. For instance, the projector we recommend can throw a 100 inch image from 8.3 feet away. If you’re in a smaller room than that, or need to keep your projector closer to the wall for any other reason, the screen size will ultimately be smaller.

On the other hand, if you have a large room, the projector will be able to make a bigger picture, while the TV will stay the same size. If you’re sitting further away from your screen (hopefully in comfortable seating), projectors have the edge; if your room is smaller, or you’re sitting closer to your screen, it’s probably better to get a TV instead.

One last note: if you’re setting up a movie night outdoors, say in your backyard or on the patio, an outdoor projector gets the edge thanks to its larger screen, and its weather-proofing and durability to hold up in the elements.

When it comes to brightness, projector systems are not the best option. With projector systems, the brightness often very much depends on how dark the room is. If you have a brightly lit room and cannot dim the lights or close the curtains, the quality of the image will be affected. In contrast, TV’s have onscreen filters that prevent ambient light from entering the display and from interfering with the image.

Moreover, most flat panel TV’s in the range of $2,000, have a bright screen and are capable of producing more luminance than projectors in a similar price range. So projector systems cannot beat LED TVs in this respect.

TV’s are a great and easy option here, as they already have usable speakers. Unlike television sets, projectors generally don’t come with speakers. Some projectors do have built-in speakers, but the sound is (usually) awful. So, with a projector, you’ll need a receiver and a couple of speakers to place alongside your screen.

So, when you compare TV’s with projectors, you might prefer a TV since it can handle basic audio needs on its own. However if you are going for a full home theater experience you should consider upgraded audio such as a surround system or a soundbase to give you a full cinematic experience.

If it’s not readily apparent, TVs are the more convenient option. They’re simpler to use, require less planning and effort to set up, you won’t be disrupted by ambient light or objects casting shadows on the screen, and you can rest easy knowing a TV will never go out of focus or require a bulb replacement. Plus, it’s not all that difficult to find an affordable smart TV that features built-in streaming capabilities, voice control, and oodles of applications — though more and more projectors are popping up with added smarts.

There is a growing need for smaller, easily installable projectors and portable projectors. Although they are being developed rapidly, they still require a considerable amount of time and effort during the installation process. Yes, modern projectors often feature movable lenses, zoom capabilities, and “short throw” projectors only need to be placed a few inches from the screen. However, the truth is that TVs offer a quicker and simpler installation and are more user-friendly. Although you’ll have to sacrifice convenience if you want to watch in 3D, be aware that the mesmerizing viewing standard is quickly becoming a thing of the past in the television realm.

The short answer is that TVs are easier to install. Large TVs may be heavy and a little fragile, but they’re simple to place in a home theater setup and easy to use. Plus, they act as a great unifier for your devices and equipment, since everything can be plugged directly into the TV itself and, in most cases, can be controlled via the TV’s remote. Unless you’re mounting the TV to a wall, installation is relatively painless. And even if you do opt for the wall-mounted setup, you’ll be able to complete the project on your own. Should you need an installer, their job will be quick and cheap.

Projectors can be complicated, requiring more planning and effort to install — although short-throw projectors make it a little easier. The first issue is your screen. Will you be painting a wall, setting up a free-standing screen, or opting for a motorized screen that will need to be attached to your ceiling or wall? Regardless of the method, you’ll need to be sure you have the necessary space — those screens are big. Then, you’ll need to make sure the projector is correctly positioned, which is a bigger challenge than you might think.

Whether you’re getting a TV or a projector, the image quality you get is largely going to come down to what you buy. The difference is, your TV’s image quality will not be affected nearly as much by how you set it up.

Right now, just about any smart TV you buy will offer a 4K picture and likely HDR on top of that. Even budget models are delivering these features. Just how good that picture is will come down to the quality of the TV you buy, but you can rest assured that you’re getting the picture you pay for.

Meanwhile, the image quality you get from a projector is another story. For one thing, 4K projectors are still a rarity, and even affordable 1080p projectors are hard to find on a budget. (Side note: Many projectors obscure their resolution by advertising a ‘supported’ resolution that is much higher than their actual ‘native’ resolution, so always keep an eye out for this language before buying a projector).

Though resolution is a key aspect of how sharp an image is, the other aspect is image size. Since that’s variable with a projector, your setup will actually change how sharp your picture is (especially if you forget to adjust the focus). And that’s just one of many things your setup will impact. Having your projector cast a larger image will reduce the sharpness of that image, and it will also lower the brightness of the picture. Using keystone correction can also have an impact on the quality of parts of the image.

In many ways TVs have the technical edge over projectors, but most of that can be forgiven if you have the space to create a huge screen. The differences in image quality will be noticeable if you’ve got a keen eye, and especially if you watch 4K Blu Rays or play a lot of video games. Still, the theater aspect of viewing movies and TV shows on a giant screen is hard to beat.