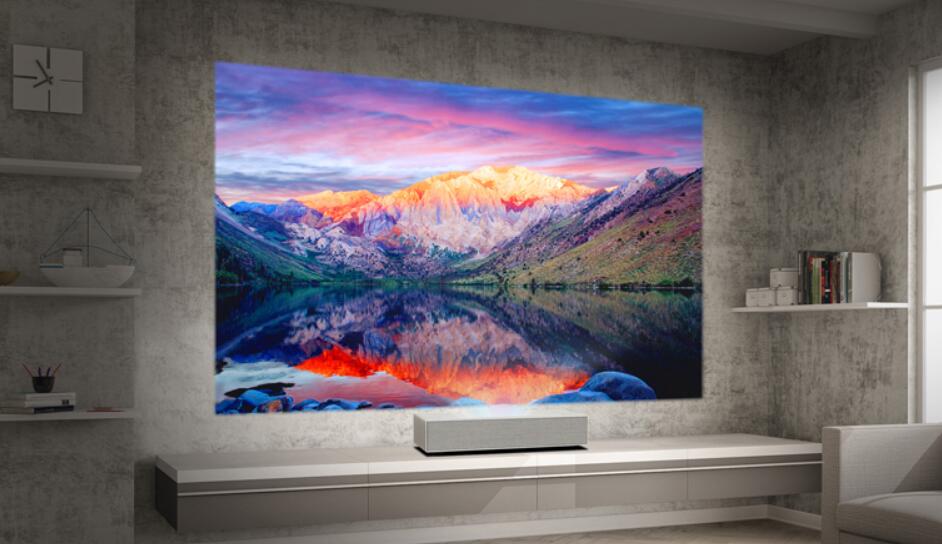 When you hear the term ‘laser’ projection you might think of that scene from Star Wars where the giant Death Star shoots lasers to blow up unruly planets. Fortunately, that level of high-powered laser technology isn’t widely available yet. But as it turns out, lasers are a great alternative to traditional lamps in a projector.

There are plenty of tips and tricks about how to get the best out of your projector, most of which have related to maintenance of the lamp. To help extend lamp life of the projector, there were some simple, but slightly annoying rules to follow, like ‘Be sure to cool your projector down before packing it up!’ or ‘Keep your projector in a cool location to reduce lamp temperature!’ This new laser technology makes all those old tips crazy AV old-timer talk.

To help you find the best laser projector to serve all of your home entertainment needs, we spent multiple hours researching over 20 different products. Our research and ranking focused on features like brightness, resolution, and user-friendliness. However, we also gave points to projectors for additional features like portability, onboard audio, and smart functionality.

And especially among discerning entertainment fans! Well, the reasons for this trend are pretty simple and we touched on several of them in the intro. Laser projectors have all the big picture impact of traditional projectors without the extensive setup. They sit close to the screen so nobody needs to walk in front of the beam when getting up for more snacks, and the image is delivered in crisp and bright native 4K.

While traditional home cinema projectors tended to be installed in addition to TVs as home theater platforms, new gen laser projectors are TV replacements that don’t need any special setup at all. They’re smaller than previous generation projectors, and with their short throw fit nicely on regular entertainment centers. No ceiling mounts, floor rails, or piles of books. This is a whole new approach to projectors that retains the wow factor and even improves on image quality.

The Laser Meets the Video Projector

When used as a video projector light source, lasers provide several advantages over lamps and LEDs.

The Optoma CinemaX P2 is an upgrade to the P1 from the same manufacturer, and it has done a lot of work to keep the best features from the previous generation and improve its offering by adding some new features. Before we get started exploring new features, it’s worth it to talk about the projector’s performance and picture quality. You get native 4K UHD resolution here with amazing color accuracy due to the projector’s 2,000,000:1 Dynamic Black contrast ratio, HDR10 support, and six-segment color wheel. You also get an impressive 3,000 lumens of brightness, which offers a good balance between both light and darkroom performance. This is an ultra-short throw project that can create a 120” screen from as little as 5.7 inches away.

The new features in the CinemaX P2 projector are mostly focused on connectivity and user-friendliness. For starters, the projector offers IFTTT support, which means you can seamlessly connect it to a wide variety of smart devices. You can also use the project with smart home voice assistants like Alexa Echo and Google Home devices. The Optoma features three HDMI ports, three USB ports, an optical out connection, and audio out connection for comprehensive connectivity. Even better, the projector features stellar audio with an integrated 40W soundbar. Be aware that this projector is an excellent choice for TV, movies, and casual gaming, but more competitive gamers may be turned away by the somewhat slower 55ms input lag.

When you first unbox the LG HU85LA laser projector, you’ll be immediately impressed with the product’s overall design. Many projectors are shaped strangely, with awkward angles or hard-to-reach controls. This isn’t the case with the LG. Featuring clean lines and a modern white case, this projector is designed to look good without sacrificing functionality. It also features a built-in soundbar, which could probably be better in many instances, but still works in a pinch if you don’t have your sound system set up yet. The LG is a little heavier than other projectors, weighing in at 26 pounds, but since you’re not hanging this on the ceiling, this isn’t much of a problem.

The LG projector’s performance matches the high-quality nature of its design, too. This is a short-throw projector that only needs 7.2 inches between the unit and the wall to create a picture of up to 120 inches. With native 4K resolution, Dynamic Tone Mapping, HDR10 support, and LG’s proprietary TruMotion technology, you’ll get a stellar picture no matter what movie you’re watching. The LG HU85LA uses a three-channel laser instead of a traditional color wheel, which leads to insanely accurate and vivid colors. We were also really impressed with the overall user-friendliness of this laser projector. It comes with a simple, well-functioning remote control and LG’s award-winning webOS lite, which is easy to navigate.

Even though the Epson LS-100 laser projector doesn’t offer ultra HD resolution, it still creates a stunning overall picture quality due to a variety of different features. For starters, the LS-100 has an amazing dynamic contrast ratio at 2,500,000:1. This amazing contrast ratio means you’ll get some of the deepest blacks and most vivid colors at the same time. When you combine this high contrast ratio with the Epson’s advanced three-chip design – which eliminates rainbow effects and white segments – you still get a stellar picture.

The Epson is also designed really well overall, although it is much larger than other laser projectors and requires upwards of 15 inches to create a larger screen size. Keep this in mind as you plan out your home theater space. We were most impressed that the LS-100 included 14 total connection ports, including HDMI ports, USB ports, audio ports, and more. This means you can connect many different devices for a comprehensive home entertainment system. 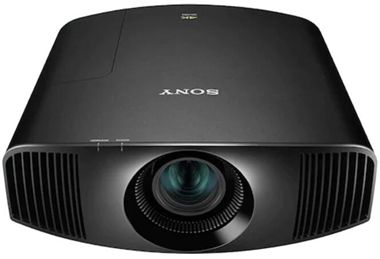 The Silicon X-tal Reflective Display (SXRD) in the Sony VW325ES gives it arguably the best picture quality of any home theater projector. Its resolution exceeds the on-screen pixels of even most 4K projectors, with a high dynamic contrast for rich black levels and superior image depth. Its Reality Creation technology and HDR enhancement further enhance the sharpness, resulting in an image that’s truly life-like and immersive.

The Sony VW325ES brings this high image quality to any kind of content. Its Motionflow technology keeps on-screen action smooth so sports and action movies stay sharp and detailed. It also supports 3D content and has upscaling for lower resolutions, so all content will look great on the VW325ES.

In a dedicated home theater space, the Sony VW325ES is a great choice, but it’s not the most flexible option in terms of where you can use it. It needs a lot of space—about 14 feet for a 100” screen. You’ll also need a dark space with good light control measures, along with external speakers since there aren’t any built-in to the projector. 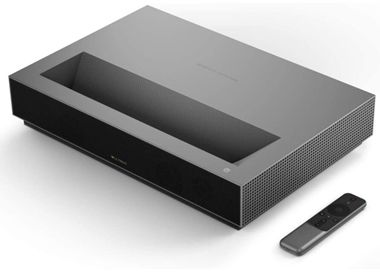 The WeMax Nova is another great option if you’re looking for all-in-one capability. Its integrated Android interface comes with access to thousands of streaming apps (with the notable exception of Netflix, as is the case with any interface that uses the Google Play store). It also has 30-watt speakers with Dolby Audio support, producing louder and more immersive sound than you’ll get from most projectors.

Setting up the WeMax Nova is a straightforward process. It only needs inches of distance for a big screen and has an 8-point keystone correction feature that quickly corrects the on-screen geometry. Just put it on your entertainment center, plug it in, and you’ll be watching in minutes.

At 2,100 lumens, the lamp on the WeMax Nova is just bright enough for lights-on viewing, though it may still struggle in well-lit environments. This is its only weakness from a picture quality standpoint, though. The Texas Instruments DLP display produces a sharp, high-contrast image, with support for HDR10 and full coverage of the Rec. 709 color spectrum.