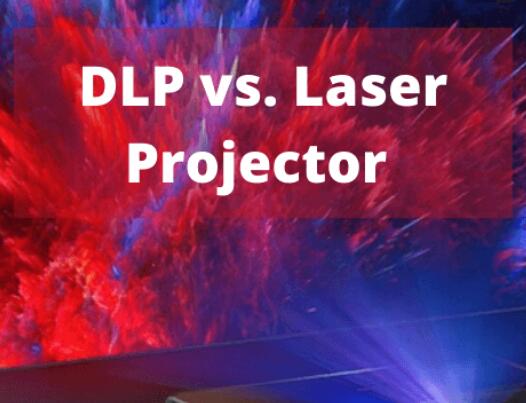 Projectors have existed for a long time. We won’t delve into it too deep, like discussing the camera obscura, overhead projector, slide projector, film projector, and so forth. Instead, we’ll cover the modern all-digital projector that recently became affordable enough for the working class to buy as an alternative to huge HDTV screens. We’ll cover two of the four famous types of projector—DLP and laser projectors—while leaving off the LCD and LED projector for another time.

With that said, what’s the difference between a DLP projector and a laser projector? Also, which is better when it comes to the DLP vs Laser projector debate?

A DLP, or digital light processing, projector makes use of tiny mirrors which in turn reflect light toward a screen. There’s typically a physical color wheel, which is a literal spinning wheel full of color filters used to generate sequential colors. These can be found as single-chip DLP projectors, or three-chip DLP projectors with red, green, and blue DLP chips. Price varies quite a bit, from a couple hundred dollar to ten of thousands. DLP projector are easily the most common, with the vast majority of home theatre projector utilizing DLP technology.

Light output on DLP projectors tends to be robust, and suitable for atmospheres with ambient light such as classrooms and conference rooms. Likewise, color accuracy, while varying quite a bit by device, oftens shines with DLP projectors. Motion blur isn’t a huge issue on most DLP projectors, with crisp, sharp images during fast-motion sequences in action flicks and sports. However, DLP projectors may be plagued with rainbow artifacts where bright objects may give off the appearance of a sort of light trail. This doesn’t affect three-chip DLP projectors, but single-chip DLP projectors might experience artifacting.

Traditionally, lamps provide the light source for projectors. This remains true of DLP, LCD, LED, and LCoS projectors. However, lasers are beginning to replace lamps in projectors and may be the future of projection. Image quality is fantastic, arguably trouncing even LCoS, and lasers last longer than even energy-efficient LED bulbs. Moreover, lasers are more durable than traditional projector bulbs, while delivering almost instantaneous on-off functionality. Similar to an LED projector, a laser projector still uses an LCD, DLP, or LCoS chip, and speaks of the light source rather than the projection technology itself.

While a standard bulb-centric projector uses RGB lighting to reproduce colors on the screen, a laser projector instead generates the precise colors needed for a picture. As such, it’s more energy-efficient, and this even allows a laser projector to get extremely bright, far brighter than DLP, LCD, or LCoS units. Ok, so what’s the catch? Price. Laser projectors are incredibly expensive, retailing for several thousand at minimum.

The Evolution from CRTs to Lamps 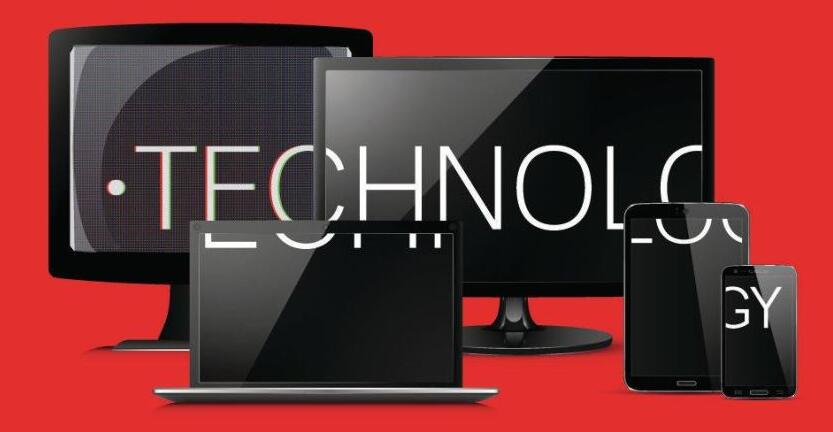 In the beginning, video projectors and projection TVs employed CRT technology, which you can think of as very small TV picture tubes. Three tubes (red, green, blue) supplied both the needed light and image detail.

Each tube projected onto a screen independently. In order to display a full range of colors, the tubes had to be converged. This meant that the color mixing actually took place right on the screen and not inside the projector.

The problem with tubes was not only the need for convergence to preserve the integrity of the projected image if one tube fades or fails, but also that all three tubes had to be replaced so that they all projected color at the same intensity. The tubes also ran very hot and needed to be cooled by a special gel or liquid. To top it off, both CRT projectors and projection TVs consumed a lot of power.

Functional CRT-based projectors are now very rare. Tubes have since been replaced with lamps, combined with special mirrors or color wheels that separate the light into red, green, and blue, and a separate “imaging chip” that provides the image detail.

Depending on the type of imaging chip used (LCD, LCOS, or DLP), the light coming from the lamp, mirrors, or color wheel, has to pass through or reflect off of the imaging chip, which produces the picture you see on the screen.

The Problem With Lamps

LCD, LCOS and DLP “lamp-with-chip” projectors are a big leap from their CRT-based predecessors, especially in the amount of light they can emit. However, lamps still waste a lot of energy outputting the entire light spectrum, even though only the primary colors of red, green, and blue are actually needed.

Although not as bad as CRTs, lamps still consume a lot of power and generate heat, necessitating the use of a potentially noisy fan to keep things cool.

Also, from the first time you turn on a video projector, the lamp starts to fade and will eventually burn out or become too dim (usually after 3,000 to 5,000 hours). Even CRT projection tubes, as big and cumbersome as they were, lasted a lot longer. The short lifespan of lamps necessitates periodic replacement at an added cost. Today’s demand for eco-friendly products (many projector lamps also contain Mercury), calls for an alternative that can do the job better.

Lamp vs. Laser Projectors– Which is Right for You?

A quick look at the specifications of laser projectors will show you that they clearly have some concrete advantages over lamp projectors. But these advantages will be worth different things to different people.

So how do you know which is the best option for you? Here, we’re going to take you through the six steps to answer the hot question of the moment – lamp or laser?

Decide how much colour and contrast you need

Laser projectors provide a wider range of colours, and sharper contrast between them than their lamp counterparts. If your projector will be used to display detailed visuals or video you’ll find this laser light source benefit a helpful attribute.

A wider colour palette will always look more impressive than its narrower counterpart, but if you don’t have a practical need for this benefit in your home cinema or office projector, it may be economically sensible for you to opt for a lamp projector with a lower range of colours.
For occasional use viewing simple presentations, documents and spreadsheets, a lamp projector could well be perfectly adequate.

Work out how bright your space is

Laser projectors are a relatively new technology and like all new developments, they arrive at the top end of the market. In projector terms – this means high brightness. In many instances, they can offer up to 20,000 lumens or more. In most office settings, this simply won’t be needed.

Darker meeting rooms just don’t need this level of projector to display a clear image. In most meeting rooms or boardrooms, you’ll generally only need about 5,000 lumens to display a bright image with optimum clarity and detail. However, if you have a very large screen or you’re in a larger conference venue, auditorium or lecture theatre, you may require 10,000 lumens or more to achieve the same results and laser may be a more cost effective option in the long-run.

Home cinema laser projectors aren’t designed to be ultra-bright as the assumption is that they’ll be used in lounges or dedicated dark rooms. These rooms generally have the opportunity to block out a lot of ambient light making brightness an almost-moot point for home cinema.

However, laser does offer superbly bright whites, high contrast and clear benefits on colour-brightness that aren’t apparent on the spec sheet so we’d still advise that you get a full demo of a range of projectors before discounting laser.

This should be a fairly easy one to answer. Laser projectors come with a much longer lifespan, and come with the added benefit of not having to regularly change the lamp. A lifespan of 20,000 hours is common for laser projectors, whereas the lamp life on a lamp projector can be as low as 2,500 hours.

Manufacturers are so confident in the long lifespan of laser that they’re offering a massive 5-year guarantee on many laser projectors and, in some cases, usage-hour guarantees.

We don’t often think of hours in counts of more than 24 at a time, so it’s difficult to understand how long that 20,000 hour lifespan really is. Put it this way, it’s the same as using the device for two years and four months, non-stop. If you were to use the projector for eight hours a day, five days a week, all year – the lifespan would still be a decade.

For industrial projectors that need to be hard wearing and last a long time, this lifespan is perfect you’re your projector is more of an incidental tool, vital on certain occasions but not constantly needed, then a projector with a lower lifespan could be perfectly fine.

Where is the projector installed?

Lamp projectors require regular maintenance in order to carry on working. For a start, the lamps will need replacing, which as well as being a significant expense on top of the original price of the projector, is also highly inconvenient. The filters inside the device, which prevent dust from interfering with the mechanism, must also be cleaned regularly.

Laser projectors do not suffer these problems, as they have neither lamps nor filters to contend with. If your projector is going to be in a place that’s difficult to access, then a lower maintenance laser projector may well work out better for you in the long term especially if you consider the cost of AV technicians.

If budget is not an issue for you, we advise you go for the best model you can find and in most cases this will be a laser projector. But the vast majority of businesses and individuals will be restricted by cost.

Making the right purchase is a matter of weighing up priorities, and deciding which features we’ve previously outlined here are worth spending more money on, and which you just won’t have a practical need for.

Acquiring a projector can be a large investment, and should be taken seriously if you’re investing in any form of home theater or film display assembly.

After working to acquire proper sound equipment, the means to output high-resolution content, an appropriate screen, and possibly even an entire home theater with furniture and lighting, you’ll want a premium video experience that’s equivalent to the rest of your ensemble. This means finding one in your budget that offers the highest quality available, with 4K support and minimal image artifacting.

A laser projector utilizes a crystalized laser instead of a mechanical bulb, which means it can last for ten times as long, doesn’t generate as much heat, and doesn’t require maintenance in the same way a standard chip projector might. On the other hand, DLP can utilize pixel-shifting to offer improved visual results with sub-4K resolutions, making them a more affordable option for the average consumer.